The HExpoChem server is an integrative database containing diverse chemicals in the aim to explore human health risk from chemical exposure. The main concept of HExpoChem is to aggregate bioactivities (of proteins) associated to chemicals found in five major sources, namely in drugs, cosmetics, foods, industrial chemicals and that might interfere with human metabolites. From the chemical-protein interactions, generation of protein complexes was performed (protein-protein interactions network and protein-protein associations network) to propose potential biological outcomes (diseases, pathways, GO terms) associated to protein perturbation by chemicals.

The sources of the chemical information integrated in HExpoChem are described below:

There are several ways to search for a chemical. The user can:
Once a chemical has been defined, it will be depicted automatically in which exposure source it can be found and how many proteins it interacts with. For example, bisphenol A might be present in Cosmetic, Food and Industrialand interacts with 832 proteins.

The user has the possibility to select between four different outputs associated to the chemical.
NB: About the protein-protein associations network (PPAN and the topological protein clustering (TPC), the user will have to choose the exposure type (if more than one is depicted with the chemical search). As, PPAN and TPC are dependent of the chemical-protein interactions, the development of a network for each type of exposures will limit biais from drug-target interactions, that have been much more investigated than the other sources.

The user can search directly to proteins that are perturbed by chemicals and find relevant biological information connected to it or to protein complexes in which the input protein is involved to. To do so, the user has to write a gene name. For example, to find information for the estrogen receptor, ESR1 has to be written (which is the gene name identifier of this receptor). It is possible to find such gene names at the uniprot server (www.uniprot.org).

Click on the "Submit" button. The status of your job (either 'queued' or 'running') will be displayed and constantly updated until it terminates and the server output appears in the browser window.

At any time you may enter your e-mail address and simply leave the window. Your job will continue and you will be notified by e-mail when the job is finished. The e-mail message will contain the URL under which the results are stored; they will remain on the server for 24 hours for you to collect them.

Example input for bisphenol A 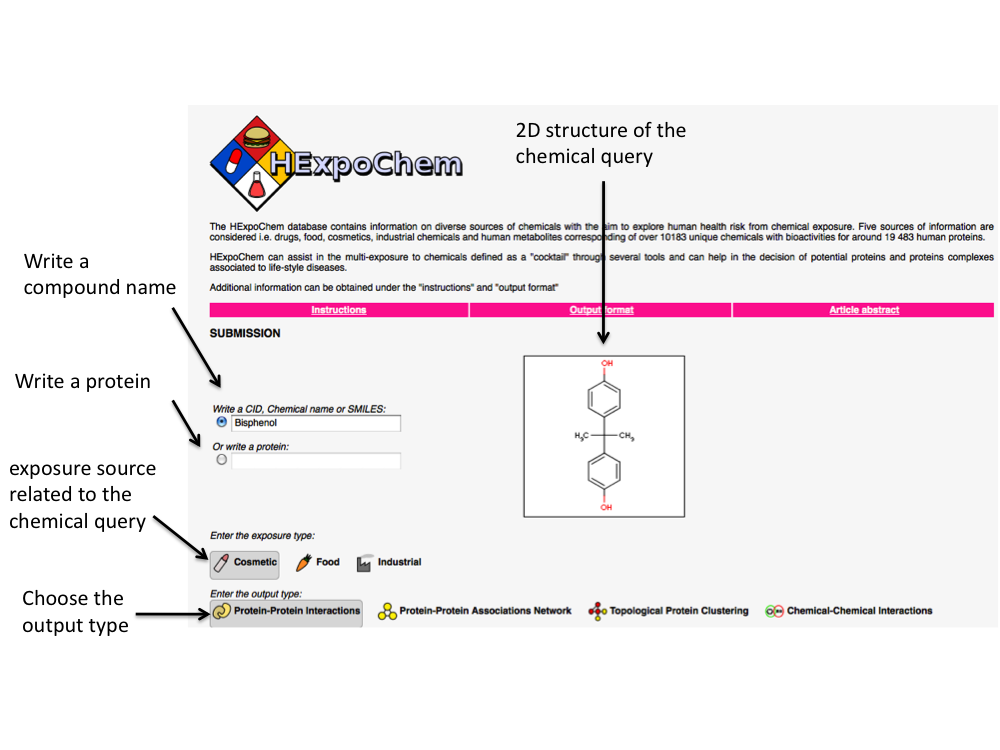